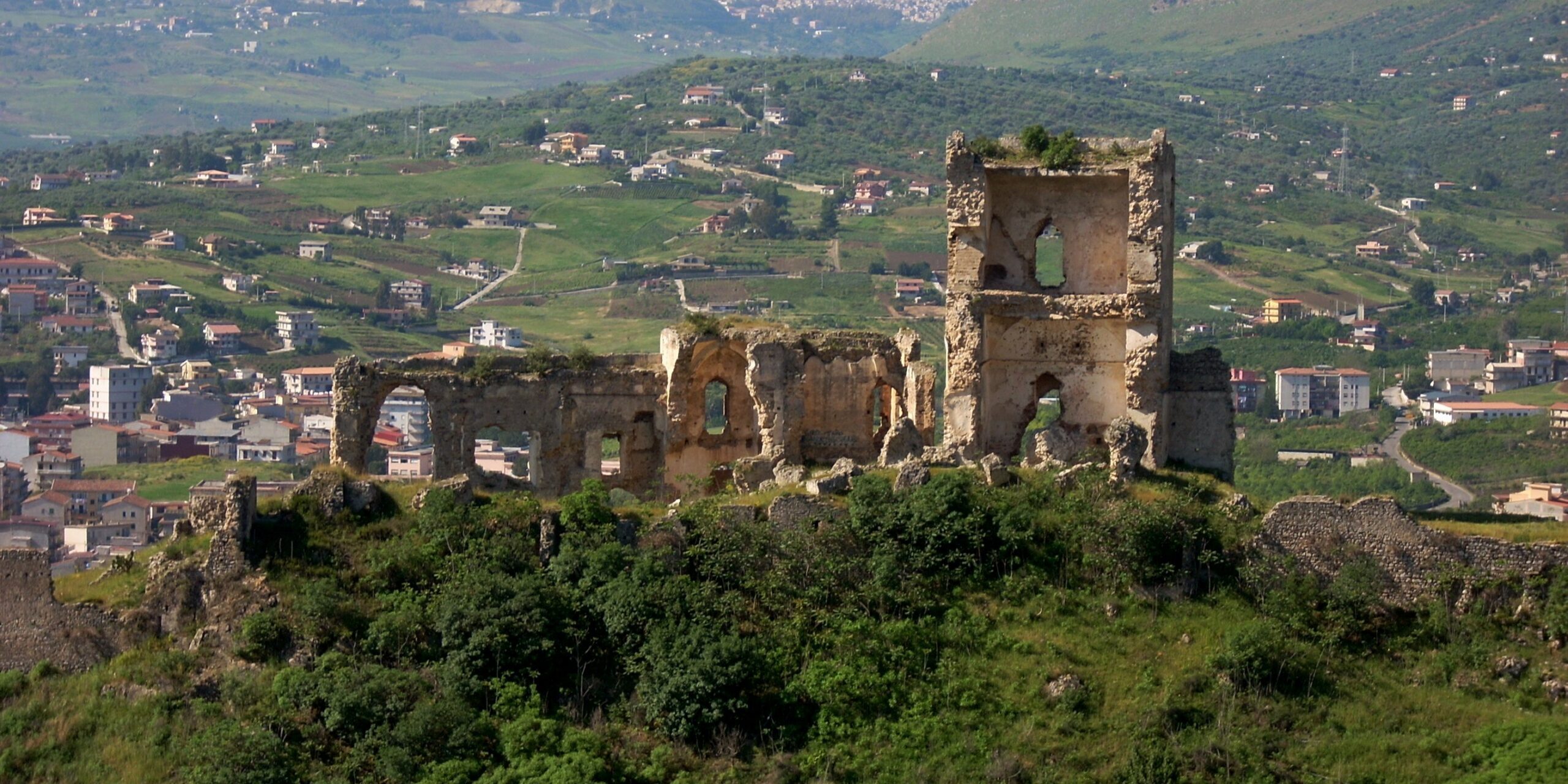 **The information below is translated to the best of my ability from the Comune di Misilmeri homepage. Please note that there may be some discrepancies.

The Comune di Misilmeri is in the Province of Palermo, about 15 km southeast of the city of Palermo. It is inhabited by almost 24,000 people and sits in the mid-valley of the River Eleuterio on the southern slopes of Montagna Grande at about 129 meters above sea level. It became a Comune in the year 1812 as part of the abolition of feudal policies. Before this, it was a dukedom under the Bonanno family, who were Catholic princes.

It seems that today’s Misilmeri is the site where there once was the ancient Cidonia, a stronghold that refugee Cretans had to construct in the 4th century a.d. after having been turned out from their cities of origin, Eleutera and Cidonia, on the isle of Crete, a part of Greece. The origin of the area, as first built, must be attributed to the Arabs, because of the remains of the ruins of the castle on the hilltop and because of historical information. Still many names for the village are handed down, many comprised of a similar denomination of Misilmeri, such as ancient Mùsuluméni. The different names will probably remain a controversy, as some people derive the name from “Menzil el Amir”, which means village of the Emir, while others derive it from “Masel Amer” which means a flourishing place bathed in water.

Misilmeri was a baronial and ducal center with concessions and privileges from the 1200’s and the gentlemen belonged to the noblest of Sicilian families, such as the Caitagirone, the Ajutamicristo, the Chiaramonte and the Moncada, the Bosco and the Bonanno. Someone thinks that among the first possessors of the castle there was even a Giorgio Antioscheno, Admiral and Great Advisor of Ruggero.

A lot of it’s historical importance is due to the fact that in this area took place famous battles between the Norman, Ruggero, and the Arabs, where finally the Arabs were defeated in the year 1068. These battles are legacy to the Italian Renaissance and have always been the avante-guarde of the revolutionary movements of 1848 and 1860, along with the death of Francisco Ventimiglia, one of the 13 victims of April 1860, in Palermo and the famed battlefield of Gibilrossa that, under General La Masa, smoothed the way to Palermo for Garibaldi.

The coat of arms of the Comune di Misilmeri portray an Arabic tower and a flying dove, in memory of the battle and the fact that later on, in continuation of the battle, some Normans who had doves in their possession were found by the Arabs in Arab territory. After soaking the doves in the blood of the Normans, they were sent, flying, back to Palermo to return the sad news of the Norman deaths.

Misilmeri is positioned on the slopes of hills, and also standing here is the “Rocca di Ciavole” or “Fortress of Ciavole”. According to Villalonga, these are the ruins of an Arab-Norman castle. This castle overlooking Misilmeri was constructed in the beginning by the Normans who transformed an existing Arab tower into an entire fortress. In 1520, it was described as a considerable fortress but later on it was embellished by the Chiaramonte family and Guglielomo Ajutamiscrito at the hands of the famous master Matteo Carnalivari. Not far from the homes of Misilmeri begins the coast of the Eleutero river, which has been navigable to the river’s end south of Marineo at least since the year 1540, having been recorded in the maps of the distinguished and famous geographer Tolomeo. The valley of the River Eleutro is much noted for its antiquity, because it contains the famous fortress of Sa ‘d, later on commonly called “castello di Bassano” or “Bassano Castle”. Other noted antiquities include the Porcara with the remains eliminated and the famous Cannita, where between 1600-1700 two Greek limestone coffins were discovered and can still be admired today in the archaeological Museum of Palermo. The patron Saint of Misilmeri is Santo Giusto (Saint Justin), a martyr from Cagliaritano, whose body is conserved in the chapel of the Madrice, within a silver urn which was donated to the citizenship of Misilmeri by the Dutchess Donna Tommasa Bosco et Sandoval, of which her son was the prince, Duke Giuseppe del Bosco-Sandoval, from May 17, 1671.

Misilmeri is a mostly agricultural village, rich with water, and is greatly fertile and productive, with varied and intensive crops and with profuse vegetation. The most popular agricultural products are grapes, olives, prickly pears, lotus, and citrus fruit. Another characteristic of Misilmeri is the wood handicraft.

In the fields of history and literature, the fame of Misilmeri helps to form some of the most beautiful parts of Italian history. One of the first botanical gardens of Europe was in Misilmeri, thought up by Duke Giuseppe del Bosco-Sandoval, and carried out by the distinguished Botanist Padre Francesco Cupani, in 1692. It is positioned next to the famous zoological garden, with access to the current day Chiasso Verde (which translates as Green Uproar!). The main public square of the village has in its midst the headquarters of the Governo Provvisorio di Sicilia, or Temporary Governor of Sicily, established in May 1860 by Garibaldi. Toward the end of the 1700’s, the first boarding school for the Sicilian nobility, il Real Convitto Ferdinando, was located in this square for a period of about 40 years.

As for popular imagination and according to many Arabic travelers of other times, buried here in Misilmeri is the famous Galeno, distinguished doctor of philosophy and medicine. The philosopher Cosmo Guastella, the poet Filippo Guastella, among the first to translate the Divine Comedy of Dante into Sicilian, and the venerable Mother Maria Antonia La Lia, founder of the Domenican Ordor of San Sisto Vecchio in Rome were all from this area. Also from this area, sculptor Gian Battista Portanova, noteworthy in America, where for a great part of his life he resided and Paternostro, the first to display the tricolor flag in the public square Fieravecchia in Palermo, and in her native village she also took part in the encoding of the civil laws in Japan. [I am not sure if I translated this correctly!]

Among the works of art that can be admired in Misilmeri are the Monumental Fountain in the Comitato Square, the work of Benedetto Civiletti and his school; the Crucifixion, a bass relief in alabaster placed in the Chiesa delle Anime Sante or Church of the Saint Spirits, work commonly attributed to the Gagini and it’s school; l’Immacolata, The Immaculate One, painted on burlap and placed above the great altar of the Madrice, a work of Vito D’Anna; la Fontana Nuova, the New Fountain, a 17th century work adorning the Piazza Cosmo Guastella, or Cosmo Guastella Square; il Campo di Gibilrossa, the Field of Gibilrossa, a work by G.B. Portanova, traced in plaster and displayed in the former consiliare room of the Comune offices, which today is the Mayor’s office; the plaster of the Madrice is all executed from Ferrajolo and the school of Giacomo Serpotta.

Insufficient information is known about the population in these long ago times. The census of Emperor Carl V, in 1548, places Misilmeri with 40 lineages, referring to the first person of each family. In the census of 1595, there were 463 inhabitants. In 1650, Misilmeri contained 1077 inhabitants with 240 houses and in 1713 it already had 2096 inhabitants and 531 houses. In 1861 it reached 7460 inhabitants.

For an interesting history of all of Sicily, check out the Catholic Encyclopedia.

Year 1861: 1st Census after the unification of Italy: 7460 inhabitants

Giovanni Montanti, a Sicilian native who has made documentary videos for over 45 Sicilian towns, has published a video about Misilmeri! It contains footage of the most important buildings, churches, streets, archaeological sites, historic centers, the cemetery, and the procession of the saints. It is now available and can be shipped immediately! Note: This video is available in VHS format only.

To purchase a video, visit Giovanni Montanti’s website at sicilyvideo.it.

Suggestive shots and an involving narration are the result of this careful study about Misilmeri’s historical heritage. A coverage that ranges from the pre-Christian age tombs on Pizzo Cannita; the sanctuary in Gibilrossa with its superb views; the hamlet of Risalaimi and its 15th century frescoes; the castle ruins; and then the village and its churches, its works of art and ancient buildings, its fountains and squares and its downtown alleys.

A valuable black and white photo repertory show Misilmeri as it was at the beginning of last century. The story of a village and its magical atmosphere during religious celebrations. A community that looks beyond the limits of time and space through its processions, faith and past traditions, thus arousing in all young hearts a sense of love and brotherhood that unites all the Misilmeri people all over the world, wherever they may live.

Just a quick note to say how much I enjoyed the Misilmeri video! You were right, he did a great job. It is very informative and was shot beautifully. I especially liked the very moving ending with the old photos. Needless to say, it will always be something significant and special to me. – J. La Rose

I received my video today and it everything that I expected and more. A beautiful job. – A. C.

Hi I just received my video of Misilmeri yesterday and last night my husband and I sat down to watch it with a bottle of red wine and some Italian cheese. It was fantastic. Giovanni did a great job depicting Misilmeri through its history, people, and religious traditions. We were mesmerized and even though we have been to Misilmeri, we found the video full of things we did not know or see on our last trip. We are ready to go again. He did a great job and I will cherish this keepsake and proudly pass it down to my children’s children as a big part of our Italian heritage. – D. W.

I received the tape today and it is fantastic…When the lady started speaking it was as if my Father was sitting next to me as his accent in English was exactly the same and now for me to see it all is beyond words, I however want to thank you again for all your efforts in bringing my heritage forward and it is evident whether peasant or nobleman it is great to be a Sicilian. – P. Amato