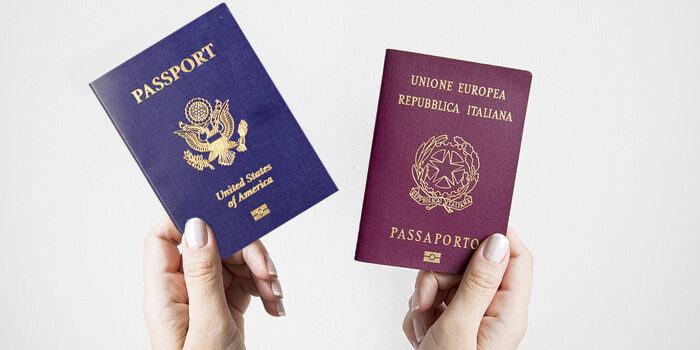 In the late spring of 2005, my brother Anthony approached me to see if I would do the research to find out if we would qualify for Italian dual citizenship. We had talked about it before, but for some reason this time I decided to jump in and do the work. It was Memorial Day weekend and the first thing I did was find a web site that broke down the requirements to qualify.

At the time it was primarily a research project for me. I did not have a plan to do something with Italian dual citizenship; it would be just a novelty if it worked out. My two brothers were interested because of the job opportunities that would be available, and my sister had some idea of buying a house and perhaps moving there someday. My parents just went along for the ancestral history we would obtain and because we wanted to do it.

Both sets of grandparents were 100% Italian. Both on my mother’s side were born in Italy and came here at early ages. My dad’s mom was the same, she came here at an early age from Italy. My dad’s father was actually born in 1905 in Philadelphia. Growing up, we used to tell people that all our grandparents came form Italy except my dad’s dad who was born here. He was always the odd man out. I used to think that if only he too were born in Italy, then I could boast that all my grandparents were from there.

The web site gave the breakdown of how to qualify by blood for Italian dual citizenship. It was clear that even though both my mom’s parents were born in Italy, we could not qualify through them. I will not go into the details because it is too much to write, but basically because of the 1948 rule, it simply would not work. The same was true for my father’s side as it pertained to his mother. My dad was not born after 1948 so it would not work. (To this day I still have not learned the significance to the year 1948, but those are the rules) Paternal lineage had no such requirement.

That left my dad’s father, my grandfather, who was born here in 1905. I would have to show that my great grandfather was not an American citizen at the time of my grandfather’s birth. If I could do that, then we would qualify for dual citizenship. The problem was, he was the man we knew the least about. He died very young in 1913. Nobody really knew much about him, so this would be difficult.

I found my great grandfather’s ship record that showed he came over here in 1902. The next step was to show he was not an American citizen in 1905. Through Ancestry.com I found the 1910 census records. The site lets you type in a name, but nothing was coming up. Either there was no record or the name was miss-spelled.

We had recordings of my grandfather discussing all the places he lived in Philadelphia as a kid, so I knew the address he lived at when he was born. Unfortunately, the census data is organized into city wards (which represented large sections of the city) you cannot search by street name. I would have to go ward by ward to find out. Fortunately I found online an old Philadelphia city ward map from 1915.

By looking at that map, and knowing the street, I was able to determine which ward to look in. Going page by page in that ward, I finally came upon the correct street and house. Sure enough, there he was listed with his family. The name was badly miss-spelled Jachino instead of Giacchino. Of course if you typed Jachino into Ancestry.com, it takes you right to the record. Most importantly, the 1910 record showed that both he and his wife were listed as “al” which stood for alien. (It also showed that neither spoke English nor could read) The 1910 census “alien” designation meant that when my grandfather was born in 1905 my great grandfather was not an American citizen and therefore, we would qualify through blood for dual citizenship with Italy.

Now, I had to get a letter from the immigration office stating that they had no record of my great-grandfather ever becoming a citizen. That took writing a letter to what is now the Department of Homeland Security. They sent me a letter back saying as much and so I was ready to move on. (By the way, it would be ok if my great-grandfather became a citizen after my grandfather’s birth. I could just show his naturalization papers showing the  dates. But since he never did, I had to get that letter from the US Government.

The following 18 months were about collecting all the necessary documents. This is when I utilized Jennifer at Sicilian Family Tree and her knowledge of Sicilian ancestry. You see, that is where my great grandfather came from. It started out by having her obtain the official birth certificate documents of my great grandfather and his wife. Once she did that, I had her continue to research back from there to find out as much as possible. She was able to go back 7 generations and provide me with actual copies of birth certificates, marriage certificates, and death certificates. The last person got us back to about 1750. I received a copy of the original written document along with a translation from Jennifer into English.

It was amazing to see all that going back so far. Putting that all together to get a picture of your history was really something to look at. All those people from long ago were probably being thought of for the first time in over 100 years!

Once I had all the birth, marriage and death certificates of my great grandfather and his wife, my grandfather and his wife, my mom and dad, and me and my wife, I also had to get an apostille for all documents that originated in the U.S. Even though you obtain certified copies from state vital records offices, they will not be accepted internationally without an apostille. An apostille is a authentication that allows your State document to be accepted internationally. They are usually obtained from the Secretary of State in the state where your certified document was issued.

When the time came, we were advised to have my dad go and apply first, instead of all at once. Once he was accepted, then it would be easy for all of the kids and grandkids to do it. In November of 2006, my dad went to the Philadelphia consulate and handed everything in. There was one problem with a signature that we had to fix on my grandfather’s birth certificate, but after we got that fixed everything was accepted. About 6 weeks later, he received a letter in the mail stating that his information was documented in Italy and he was able to apply for an Italian passport!

So what were the costs involved in getting this done? Well, you will be paying for birth, marriage and death certificates as well as apostilles. The number of documents depends on how far down the line you have to go. I had to go back to my Great Grandfather. You may only have to go back to your parents. For me the cost averages were as follows: U.S. birth, marriage, and death certificates- $20-$40 each, apostilles $25 each, Freedom of Information Act for naturalization confirmation $27, Italian birth certificates $50 each. The U.S. document costs do vary from state to state, but this should give you a pretty good idea. There were no fees from the Italian Consulate to apply for the citizenship. [Note from Sicilian Family Tree-since 2014, there is a fee to apply for Italian citizenship]

Research costs from Jennifer to handle the Italian research was very reasonable. I paid for a lot of additional research because I had Jennifer go back as far as possible. I also had ordered birth, death, marriage, and social security application information on many other U.S. based relatives other than the ones that pertained exclusively to the dual citizenship. The last piece was a subscription to Ancestry.com. I found it very helpful. They have different plans, but I paid $175 for 1 year and that pretty much gave me total access to all features.

I mentioned the reasons for wanting the dual citizenship in the beginning; I did leave out the fact that there are also 7 young kids that also will be getting dual citizenship. For them, having a European Union passport will open opportunities such as school, work, and other experiences available only to E.U. citizens. For me, that was probably the biggest reason for getting it done.

If you plan to do this, have fun and enjoy the process. If you have specific questions you think I may be able to help you with, you can get in contact with me through Jennifer.